FORESIGHT SCHOOLS PROPRIETRESS SPEAK ON HER STORMY WAY TO SUCCESS

INTERVIEW WITH THE SOUNDCITY HEAD HUNCHO

INTERVIEW WITH THE CEO, CLEANACE… 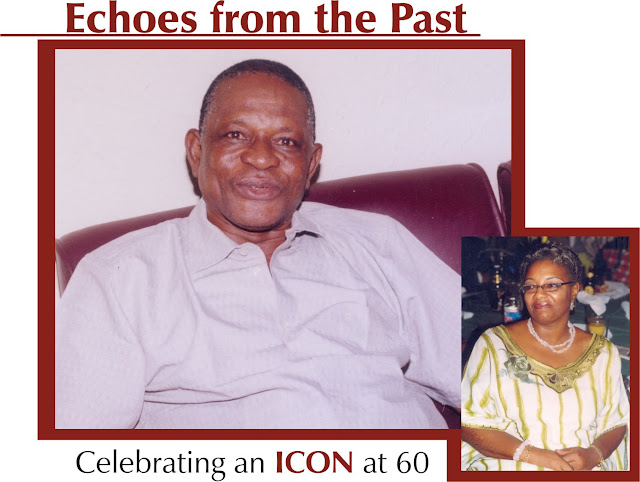 Whether you were born in the 70’s or not, you must have heard about the popular TV drama of yesteryears, “the village Headmaster” and other blockbusters such as ‘For Better, For Worse,’ and the ‘Adio Family.’ The behind-the-screen mogul of these productions and many others, the cheery husband of Bimbo Oloyede (former Bimbo Roberts) ace TV broadcaster, Chief Oloyede tells Tayo Faloye the exclusive story of the good old days… Enjoy the excerpts.

Having been a major player in TV production and entertainment, our audience would like to know you. Can you let us into you background?

I don’t know about being a major player in entertainment but I know I have played my little role as a TV producer and contributed my own quota to the development of the industry. My names are Olawole Babatunde Oloyede.I come from a polygamous family, born in a remote village of lyin Ekiti in Ekiti land. I am educated and I think it is obvious. Before I got admitted into the University of Ibadan to study Sociology; I was already involved in TV and stage productions. And, I was privileged to meet people like Wale Ogunyomi, Jimi Solanke, Yomi Obileye, Tunji Oyelana, the man who contributed so much to my life, and Wole Soyinka. After my graduation, I went back to do my PG Diploma in drama. I am married with four children.

You said you were born into a polygamous family, what was growing up like?

Growing up? I will like to keep some aspect of that because it is going to come out in my Biography. Growing up wasn’t sad but it was a bit traumatic. It was challenging. I was the only one from the other side. The circumstances were not that pleasant. I was more like an intruder into their serenity, the way it was before my mother intruded into their circumstances. However, it taught me to take care of myself. I felt so much pain that prepared me unknowing for what I am today. For example, I started entertaining the family by accident. They used to beat me for everything that went wrong since there was nobody to defend me, so anytime I am sad or happy, I will be playing music and beating buckets to entertain myself. That was how I went into drama.

Can you give us an insight into how your journey into TV started?

Well, I was jobless for a period of time. I looked around for a job and WABTV will not employ me after all the promises they made to me that as soon as I finished, I would be given a job, even with my elder brother, Sola Oloyede working as a producer there. Finally I found myself in Lagos through the relentless effort of my mother. She sent me to her Uncle, Chief Adeniyi, who is late now. He gave me a note to go and meet Dr. Kolade, DG NBCTV and he also gave me a note to go and see Mr. Olumide who was Director of television NBCTV, who then sent me to go and see Chief Segun Olusola, who was then controller of programmes, who also sent me upstairs to meet Mr. Sanya Dosunmu. He is now the Oba Olowu of Owu. He was a prince then. He took a look at me and said welcome. That was how I started working with NTA in 1972. I was trained on various aspect of TV production. I met David Orere and late Obaseki in the drama department and I just fitted in. One day, I was called into Dosunmu’s office and he said “you did drama in school, from tomorrow you are going to be the producer of Village Headmaster.” That was how I found myself being a producer overnight. I produced it for 8 years, that’s why I am called the longest serving producer of Village Headmaster. I also created and sustained what they call “For Better, For Worse. “I was instrumental to the very first privately produced TV drama called “Winds Against My Soul” by Olaolu Oguniyi, and also the very first externally sourced and produced TV programme “Adio Family.” After I left NTA, I moved to Lintas Advertising Agency before I set up my own organization, which is Media International.

You are married to the veteran broadcaster, Bimbo Roberts now Oloyede. When and how did you meet her?

That is history. You know, boy meets girl, girl meets boy. They go out together. They find that they are compatible, and somehow, one thing leads to another and they agree to get married. And they get married!
How did you win her over? Did you do so with money or you were way too romantic?
I do not know anything about being romantic neither did I have too much money. I was just a struggling producer of Village Headmaster who was only relying in his monthly salary. Looking back now, it looks strange. People say how come it is this one that got married to such a lady. She had the opportunity of Brigadiers, Alhajis and Millionaires but she settled for what my friend used to call me then “a village nobody.” If you ask her she might tell you what she found in me but I knew tight from our very first contact that we were going to have a relationship because she was working directly under me in the drama department of NTA.

Sir, you mean you dated somebody working under you, isn’t that tantamount to sexual harassment?

That is your headache (laughs). You see, we were workers and became friends. That is the uniqueness of the relationship. We talked and shared ideas. She had just come back from abroad then and I became the first friend she related with. It is not sexual harassment like we have these days where if a girl does not sleep with you, she can’t work. From friendship we developed emotional attachment for each other. She used to smoke then and I was smoking too. We exchanged cigarettes. If she ran out of sticks, she would come to me, and if I ran out of it, I can say give me your packet there. We shared values and you know genuine friendship develops into genuine love. And, when you have your eyes on a woman, you don’t see the one sitting next to you. I made her start bearing the name Bimbo because people knew her as Patricia, and I told her she can’t be answering English names in the office because I don’t. We have been married since 1979.

Ok, as the producer of the “Village Headmaster, “what were the challenges you faced back then?

I was young and dealing with big people like Jab Adu, late Elsie Olusola, Ibidun Allison, Joe Layode and Funsho Adeolu. Big people who have been running on the stairs’ while I was still running naked on the streets. It was challenging working with people much older than you and being able to hold them together professionally as a big family. The Eleyinmi of Village Headmaster, Funsho Adeolu, is now the Oba of Ode Remo and so many of them. Also, being able to create something that every human being will run home to watch up to the head of States, whenever the “Village Headmaster” was being aired then. And, 27 years after, people are still talking about it. That is why I am looking forward to doing something around village Headmaster again so that those who weren’t born then, but have been hearing about it, can have a glimpse of it.

You created another popular TV series, “For Better, For Worse” What was the concept behind it?

“For Better, For Worse” was a simple programme for husband and wife. So, it was about marriage problems between man and woman. It was meant for adult viewers and it was well accepted.

During your time, did your parents encourage you for your chosen career?

My parents had no influence on my career. As far as my father was concerned, I was a graduate which was what he wanted. My greatest influence was my contact with some of the people I had mentioned, and of course, Wole Soyinka. He more than anybody else made me say “whatever this man has become, I am going to go into it”. My brother too was a producer in TV and that motivated me too. My parents were though apprehensive because there was no definition of our profession then like doctors, lawyer and so on, but as my name spread throughout the country, they said they didn’t know it was going to be like this.

Do you feel fulfilled?

I have said it many times, if I die today, I have done it all. I have children. I have a home. Our marriage is lovely. I am comfortable. I have trained people, and I can buy my self my nice bottle of Gulder and have my drink peacefully. I can pay my bills and meet my needs. I am a grand father; I have reached the peak of my career many times over. I was controller of programmes in TV, I have become the president of my association, the Independent Producers Association and right now, I am the chairman Motion Pictures Steering Committee of Nigeria. I am okay with what God has given me.

What is your assessment of the Nigerian entertainment industry?

It is good. The entertainment industry has suffered some set backs in recent years. The young men and women in the industry are trying their best. Given the circumstances we are operating in, Nigerians are the most hardworking I have ever come across. What a producer with the little he has will come out with in 10days, and have a good production, no other producer in Africa can do it.

Waking up everyday and being able to walk, to hear, see. But my happiest moment was when I got married. Also, when my family is around or when I am able to have one of them around or when I achieve good result in TV production. But the most important part of it is your personal disposition to be happy. You are happy as you make yourself in any given situation.

When my mother passed on. She was actually sick for some time. She was really in pains, so I went to the church, knelt down and said “God, take this woman away. You have kept her long enough, let her go now”. The pain was so much that it became painful for me to see her that way. Two days later, I got a call that she had gone. If there was anything I was ready to cut my head off for, it was my mother.

What legacy do you wish to leave behind?

I have left every legacy I want to leave behind already. I am leaving memories of good relationships. There is nobody, man or woman that came in contact with me that did not prosper.

What word of encouragement would you leave for up comers in the industry and life generally?

All the values we had in our days have been eroded today. The encouragement one can give is for people to be serious. They need to realize that they need to give to life what they want to take out of it.

Previous 3 POINTS TO A FULFILLING LIFE, THE GOD’S WAY
Next BRANDS CONFLICT